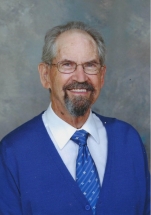 Hugh was a cheerful, encouraging man with an infectious joy and innate ability to build relationships. He was an avid reader, music lover, and storyteller. He will be deeply missed by all who had the privilege to know him.

As a retiree in Omemee, Hugh was an active member of the Omemee Horticultural Society, a writer’s club, and Gilmour Baptist Church. Hugh is a proud former member of St. Andrew’s Pipe and Drum band. Once he and Pat moved to Meadowvale, they began attending Mississauga City Baptist Church. His final residence was Holland Christian Homes, where he could be near Pat, who resides in Grace Manor.

If you wish to donate in Hugh’s honour, the links to charities are included below.

How to Celebrate a Birthday in Heaven?