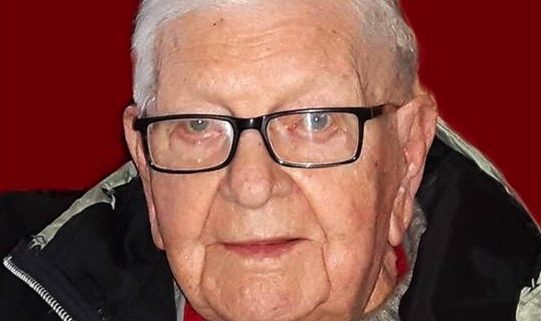 It is with great sadness we inform you of the passing of a wonderful father, grandfather and great-grandfather, in his 95th year, Harry Peppy Guest. A lifelong union activist, he was also awarded a Lifetime Membership for his service and dedication to The New Democratic Party of Canada by the Ontario NDP. Harry represented workers and his pensioners of UAW Local 458 at Massey-Ferguson, Brantford for over 30 years, in numerous elected positions including Plant Chairperson at Verity Works and the Machine Shop on Park Road, he sat on Local and International Negotiating Committee’s, served as Financial Secretary and eventually was elected President of Local 458. He helped organize the annual UAW Kids Christmas Parties and the Union Picnics Harry was also a founding member of Brant Community Credit Union and an active member of the Westdale Community Committee. His early activism and accomplishments led to him being personally recruited by Tommy Douglas to run provincially for the CCF. Harry also took great pride as an instructor and participant during many summers in Port Elgin at the original UAW Education Center. In his later years, Harry also took great pleasure recalling having instructed a very young Robert “Bob” White for Bob’s very first Steward’s Training Course in Woodstock Ontario long before Bob became the founding President of the CAW and the President of the Canadian Labour Congress. Predeceased by his wife May and son Johnny, Harry leaves behind his loving family of Edward Guest (Judie), Penny Berkeley (Keith, Tom Wells), Judy Kennedy (Mel), Don Guest (Barb), and June Reid (Ron). Loving Poppa/Great Poppa to Randie (Eva), Rory (Rosie), Kara (Dave), Jonas, Judith (Steve), Zach, Casey (Joline), Abby, Rory Jr., Bella, Grayson, Emma and Easton. Cremation will be followed by a private family service. In lieu of flowers and in honour of Harry and May’s passion and commitment to feeding students and staff at the BCI Cafeteria, the family requests that donations be made to “Brant Food For Thought” in support of “Central Public School Nutrition Program” donations by phone 519-759-6164 or online at
https://www.canadahelps.org/en/charities/brant-food-for-thought/#donate_now. We would like to thank All the Brothers and Sisters of ONA and all support staff / Technicians of SEIU and all other workers in Brantford General Hospital, ER Doctor Nguyen and finally the Amazing Sisters and Brothers working in the Palliative Care Unit with Dr Montour. The respect, kindness and compassion you provided to Harry and our extended family will never be forgotten.